Hogan Lovells, a leading Global 100 law firm needed their 100 person Northern Virginia office prepped and moved into a new building. They were set to be among the first tenants of the building and were eager to make a clean transition, with minimal or no disruption to their attorneys and their teams. They needed a partner who could handle the specific challenges of their move, including multiple locations and the need for specific expertise in moving law firms to avoid any potential complications.

In addition to moving into a new building, the law firm’s attorneys were donating several items to charitable organizations that supported pro bono lawyers in the area. These included furniture that would no longer be needed in the new space. Specific, private – and sometimes very expensive – items were also being moved from the old location to the homes of several of the firm’s partners.

In addition to moving the furniture and content for the law firm, OMX was tasked with providing a solution that would ensure a smooth transition of IT resources between the old location and the new building. On Monday morning, the firm wanted their staff ready to go at their desks without any disruption. The combination of multiple locations, IT requirements, and the size of the move required a comprehensive plan from an experienced law firm moving company. They selected OMX to work with them on this project for this reason.

The firm’s largest concern was being able to open for business on time Monday morning with zero interruptions. The number of locations involved, the issues related to preparing IT ahead of the move, and moving into a new building which involved coordinating with other projects, created challenges that required a careful approach to planning.

For the moving team, this meant multiple shipments going in different directions, including donations, IT equipment, content going to the new offices, and personal items being delivered to the partners’ homes. In addition, there were issues during the pre-move process, including that the new building space was not ready at the scheduled time. Because new or recently remodeled space is often unoccupied in this type of move, it’s vital to have a backup plan in place, which OMX recognized and prepared early in the move process.

To account for the chance that the project in the building is delayed but that the move date does not change, permits should be acquired significantly earlier than may be needed, and time should be built into the schedule to account for delays by other parties.

Preparing For A Complex Move

An added element of complexity for this move was the need for phone and computer systems to be ready to use at 9am on Monday morning. Because the space was new and the project was delayed, the IT staff was not able to set up equipment in the new office space before the move. To address this, OMX provided warehouse space in which the firm’s IT firm could preprogram phone and computer equipment and have it ready to use before moving it into the new building.

To facilitate this, OMX received and inventoried items as they arrived in the warehouse, checked all shipments for damage, and communicated any shortages with the IT team throughout the process to eliminate the risk of surprises during the setup process. This helped reduce the need for management in the office space later when the equipment was moved into place and ensured everything could be ready to go first thing on Monday morning.

In addition to ensuring IT equipment was set up correctly before Monday morning, OMX coordinated moving donations to the pro bono law group receiving them 15 miles away in Vienna, Virginia. Other items were also being moved to a satellite location in Baltimore, so it was vital that all items were marked, tagged, and organized in advance, without disturbing the firm, to ensure that during the move, all items were shipped to the correct location in the time allotted.

It’s vital in a complex move to have several backup plans in place and be flexible to address issues as they arise. OMX was able to do this, accounting for the new space not being ready during the pre-move process, and providing warehouse space for the firm’s IT staff to set up equipment ahead of the move.

As a result, despite logistical challenges of delivering to multiple locations, coordinating a unique IT pre-move, and dealing with a new building that wasn’t quite ready for its new tenants, OMX was able to ensure a smooth transition for the law firm from its old location, allowing them to open on time Monday morning as if they had been in the space for months.

Office Movers Express is a quality provider specializing in office moves, storage and warehousing and final mile services. Serving exclusively businesses, we offer a more responsive and personalized moving experience. We are recognized as the most professional and technologically advanced moving company in the DC, MD and VA area. 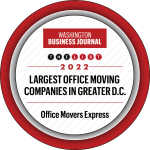 Stinson LLP
"Mary Anne and the OMX team's customer service are top notch! They were very professional and courteous. I'll be reaching out on our next move."

Property Management Account Services
"Tim and his team went above and beyond to help move furniture and assist with office layout configurations when we ran into the unexpected. It was a super long day and OMX was very professional and helpful."

Freedom Home Care
"Thank you for taking care of our relocation. It was the best moving experience I've ever had. Hakeem and the team did a great job."

Valneva
"The movers were fast, nice and professional. OMX is super customer oriented and the communication is great."

BTW Images
"The move experience was fantastic and the movers were very helpful with getting everything set up in our new space. Thank you for being flexible with our tight timeline."

Porter Hayden
"We truly appreciate the professionalism involved and have recommended your services to another tenant in our building. Very good overall experience."

Lumina Foundation
"Our move went well. Your crew was very helpful, efficient and friendly. A pleasure to work with. Thank you for your flexibility."

Wadsworth Financial Consulting
"I just got back from a week vacation and walked into my new office that was set up by your team at Office Movers Express. Everything looks incredible and my team said that your crew did an amazing job! All I’ve heard is that your team was extremely professional, hard-working, organized, and efficient."

Competitive Power Ventures
"The team you sent took great care of us! Our building can be difficult to navigate with the loading dock/security desk and your team was extremely patient with the process. Once onsite they were very courteous, professional and handled everything with great care."